Getting the Most Out of Your Whale Shark Encounter 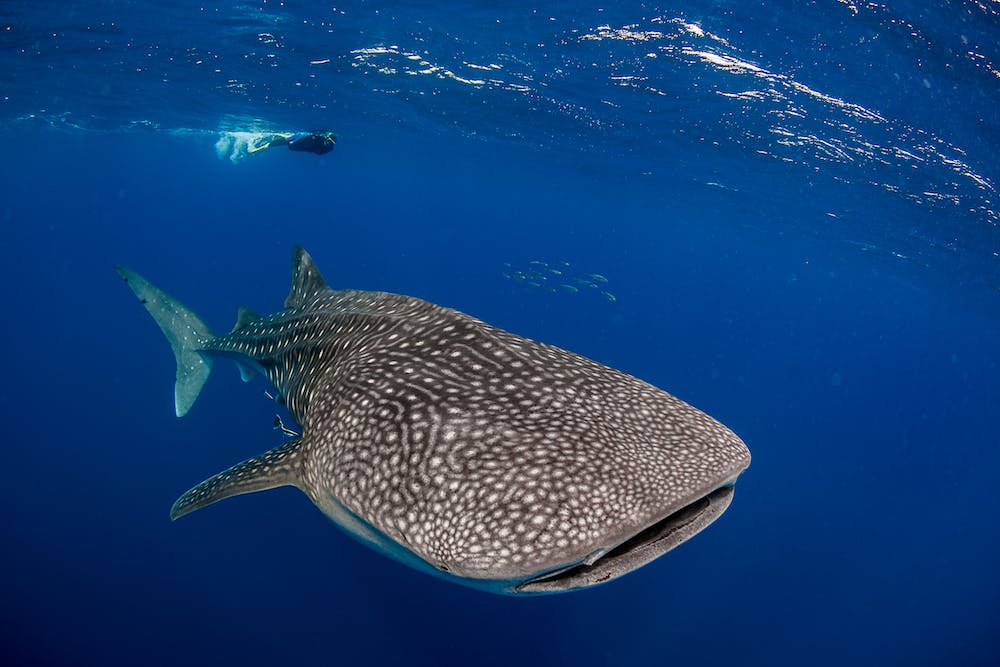 On the day, our expert Ningaloo guides and crew will give you all the information you need, and help you to have the best experience possible, but a little advance preparation never hurts, right?

Firstly, when we say you’re going to ‘swim’ with the Whale sharks, we’re not kidding! The sharks at Ningaloo are generally on the move – some just ambling along, others seem to be on a mission – and we aim to swim alongside them.

So if your swimming and snorkelling skills are a bit rusty, practicing before you leave home will help you keep up with a big spotty fish if he happens to be in a hurry.

In particular, practice your fin kick: try to kick from the hip, with a straight-ish leg, rather than bending from the knee. This will be less tiring and give you more power, but it will also help keep your fins below the water surface: if you’re breaking the surface, you’re churning up bubbles, which makes seeing the shark (much less taking his portrait), a whole lot more difficult for whoever is swimming just behind you.

Having said that, if you’re not a strong swimmer, don’t worry: our skilled crew will make sure you’re in pole position to see the sharks as they come by, and can often even scoop you up and pop you back in further along the shark’s path.

Listen to Our Mission

Once you’re on board and kitted out with snorkelling gear, we’ll give you a briefing on how the day is going to play out – and it’s worth listening closely to our guides since their mission is to make sure you have the best possible wildlife encounter on the day.

When a shark is spotted and the boat is in position, our crew will get everyone lined up on the marlin board (that’s the water-level platform at the stern of the boat). First in the water will be our photographer, who locates the shark and indicates to the boat skipper which direction it’s headed.

The captain then manoeuvres the boat into the best position and our marine ecologist guide jumps in and calls everyone to follow.Then it’s a matter of everyone lining up along the same trajectory as the shark. It’s pretty exciting when that massive head looms into view, but don’t hang around gawping too long: start swimming!

Most of the time, an average swimmer will be able to keep pace with the shark, but if you forget to start swimming as it approaches and get too far behind it, it could be difficult to catch up.

You Get Every Opportunity

Live Ningaloo is the only Whale shark swim operator on Ningaloo that limits the number of guests to 10 instead of 20. Since the rules allow no more than 10 swimmers in the water at a time, this gives us the advantage of making sure all our guests have every opportunity to swim with the sharks.

While we never know what we’ll encounter on the day – we’re dealing with ‘wildlife’ after all – you’ll generally get several opportunities to swim with a shark. So take your time, relax and enjoy the experience!

Our big tip is to spread out! We encourage the group to form a ‘V’ around and to the rear of the shark – if you’re a strong swimmer, head around to the far side of the shark so that you and everyone else gets more space – much better than being all clustered together in a flurry of fins!

Move around the shark and observe it from different angles and distances – moving back gives perspective on its size, and swimming along behind that massive tail is mesmerising!

We’re committed to ensuring that you have the time of your life, so please let us know if you have any concerns or if there’s anything we can do to make your day even more special!

Swim with Whale Sharks in Exmouth

Dreaming of an up-close encounter with either whale sharks? We tailor your excursion to create an intimate, once-in-a-lifetime experience you’ll treasure.