Mermaids on the Ningaloo Reef 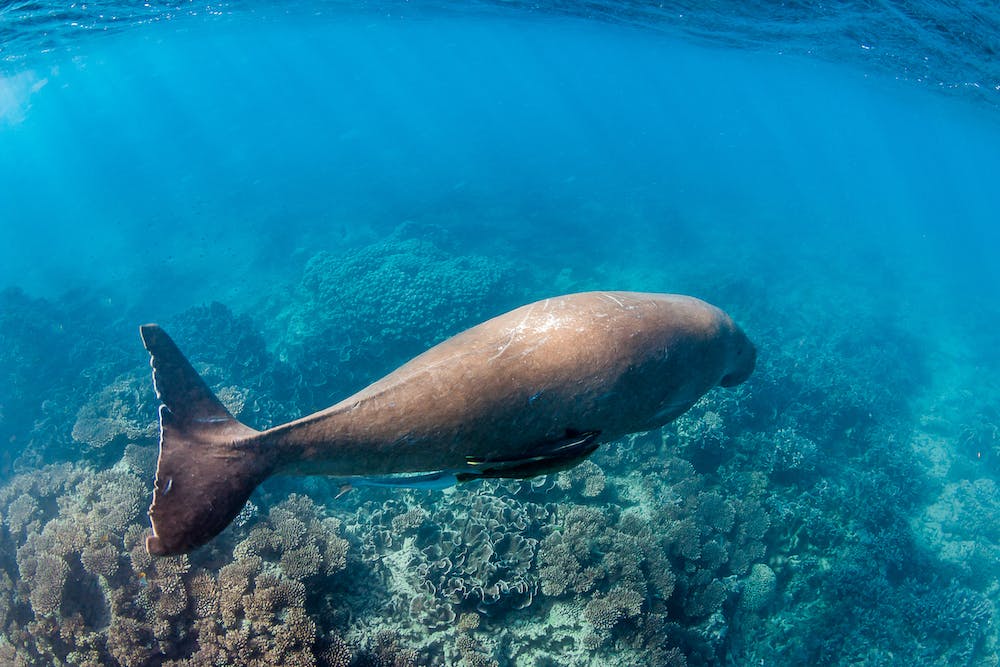 The Ningaloo Reef: where giant sharks of the blue come to feast on the tinniest of life. Where humpback whales sing and play, throwing their gigantic selves to the skies, only to crash back down to sea, making waves. Where black and white predators thrive, and turtles’ nest, tigers of the sea prowl, and dolphins surf.

Living a far humbler life, in Ningaloo’s sheltered waters, is an animal of legend. An animal that has inspired historic tales, amongst seafarers, of mermaids and sirens. Once hunted for their meat and blubber, but now protected, throughout Australia, Dugongs have come to prosper in the shallow seagrass beds which dapple the countries warmer coastlines. Not least, the seagrass beds of The Ningaloo Reef and the Exmouth Gulf.

Having out-lived its closest relative, the Steller’s sea cow, which was hunted to extinction in 1768, the dugong is the only surviving representative within the family Dugongidae.

Weighing as much as 400kgs and sharing a similar form to that of a hippopotamus, one might expect the quest, to find one, to be short-lived. The elusiveness of the dugong, however, is unparalleled within the aquatic realm, making the search a vast challenge. In contrast to their size and shape, they hold a grace that is reminiscent of a ballerina, perhaps, the attribute that once led ancient sailors to believe them to be mermaids.

Spending most of their time on the ocean floor, grazing on Ningaloo’s rich pastures of sea-grass, dugongs are seldom at the surface. Their large banquets are only interrupted by the urge to breathe, rising to break the glass above, sending a cloud if mist from a fatty snout. A glimpse, maybe, but the sight of this enchanting creature is one that few have had the privilege to witness.

The life of a dugong

After a 13 to 14-month gestation period, female dugongs will give birth to a single calf, or on rare occasions, a set of twins. Maternal bonds are strong, and long-lived, with calves suckling from their mothers for up to 18 months after birth. Being slow growing mammals, their early years are riddled with threats of predation by larger animals, such as sharks and killer whales.

During adulthood, dugongs will lead mostly solitary lives but can be seen in pairs and even in herds of several hundred strong. They feed exclusively on seagrass and will feast on as much as 30+kgs of it every day. Ningaloo’s rich beds of Halophila ovalis (dugongs preferred seagrass) sustains a healthy population of breeding animals which are a highlight for tourists, visiting the reef.

Where to find them

Dugongs can be spotted from a number of beaches around Exmouth and Cape Range National Park. The seagrass beds of Tantabbidi and Milyering make these areas as good places as any to start looking. If a trip closer to town is more suited though, these captivating creatures often frequent nearby beaches such as Bundegi, and Dunes surf beach.